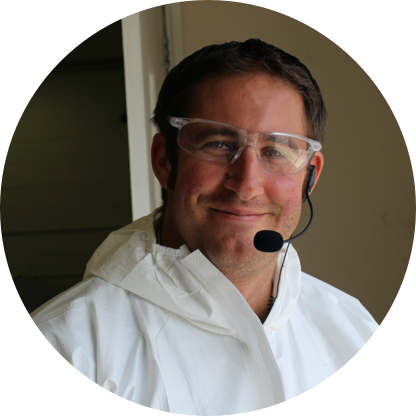 From watching paint dry, to having ‘The Most Famous Hands In The World’ - Gareth Thomas’ journey with AkzoNobel’s International® brand

For many, watching paint dry is the epitome of tedium.

But, for Gareth Thomas, it is quite the opposite.

As a Technical Support Team Manager at AkzoNobel he has devoted extensive periods of time to doing just that.

And the results speak for themselves…

Over a 13-year-career Gareth has been involved in the development of a number of breakthrough products – including the ultra-high gloss topside paint Perfection Pro.

It saw him capture the paint drying process on film to demonstrate how the product’s ultra high-gloss coating developed in real time.

Based at AkzoNobel’s International yacht coatings Southampton, UK site, Gareth is part of the Yacht division’s research and development (R&D) team, where he develops long-term strategies to ensure a strong pipeline of products for the next five to 30 years.

“I’m quite lucky that I get to be involved in a huge number of innovation projects,” he says. “I seem to be the go-to person across most new projects in the yacht business, so it’s quite a varied role.”

The AkzoNobel Custom Paint Guides that are available across some of our International yacht paint websites, which Gareth played an instrumental role in creating, has been the defining project of his career with the company so far.

To develop the guides, which allow customers to build a how-to guide depending on their needs, Gareth decided the best approach would be to “get a load of boats and just paint them”, with a crew filming the process.

“We hired a local shed in one of the marinas in Southampton and we acquired six boats in various states of disrepair,” he says.

“Over a period of two weeks we built up a video library and then spent what felt like months making sure that all the text and lengths of videos were edited in such a way that as you piece together this custom guide, you didn’t pick up a random selection of things, so they work together.”

Gareth thinks the project made his hands “probably the most famous hands in the world” as he spent an entire day mixing different types of paint and filming them from different angles.

One of the main challenges was filming the boats from angles that could be used by customers in countries across the globe.

“You can get very specific UK-style boats that wouldn’t work particularly well in the US or in Australia,” he explains. “We spent a lot of time finding certain video angles to try and make sure that it didn’t put people off because it’s nothing like the boats we’ve got here. We tried to get generic-looking boats.”

When creating the custom guides, Gareth felt they were taking existing how-to guides and videos one step further, with a service that was easier for customers to personalise.

“You’ve got a lot of YouTube vloggers out there, where you can watch a video to show you how to do something but it’s very specific to what they’re doing,” Gareth says. “But the breakthrough bit of this was about how we can actually turn this into little bits that can be pieced together so someone can build their own custom guide.”

As well as creating the AkzoNobel Custom Paint Guides, working with the International brand has afforded Gareth the opportunity to travel the world as part of The Ocean Race (formerly the Volvo Ocean Race), where he was involved in supporting AkzoNobel’s entry.

“I felt quite lucky to be involved in such a high-profile project and it gave me the opportunity to go and see customers in different parts of the world and get feedback from there, which all feeds back into a lot of the innovation projects that we’re doing.”

Gareth says he’s proud to work with the International brand because of the passion his colleagues have about boats and yachts.

“We’re helping to bring joy and happiness to people’s lives, whether that’s making your own canoe, refurbishing a little boat or a parent and their kids working on a boat on the weekend.”

“I think that we’re bringing pleasure and excitement to people’s lives through the enhancement of their boat projects.”

Visit the following to use one of our active paint guides: