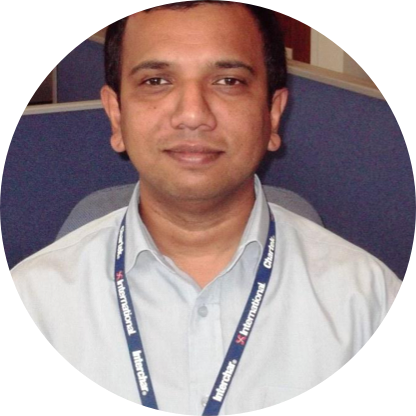 The iconic red propeller logo of International looms large in many of Ajith Varghese’s earliest memories.

But, growing up in the historic Indian port city of Cochin, joining such a globally renowned business seemed a remote possibility.

“My dad worked in Cochin Shipyard,” he recalls. “So I had the opportunity to be in the shipyard and see the ships being built and launched.

“The International propeller was a very common sight and at that time the company didn’t have a management facility in India. Then, in the 2000s, I was part of that company, which I never thought I would be.

“We have a history of 140 years now, so I think it's a privilege to be a part of International as a brand.”

Now AkzoNobel’s Section Leader in Anticorrosive & Finishes Team, Ajith’s career with the International brand started in 2002, when he was working as a chemist in a laboratory in Bangalore. He then moved to Singapore in 2004 to work in the company’s Protective Coatings and Marine Coatings business as a support chemist.

In 2005, Ajith got the opportunity to move to Felling to join the Protective Coatings global support team, supporting the universal pipe coatings (UPC) product range, which he says was a “big jump”.

“I was part of a team of global support, so you have customers from different parts of the world and you work closely with them.

There was also a “culture shock”, he says. “But peers out here who you work with are truly inspiring and give all the support so you feel like you’re in a second home.”

In Felling, Ajith played a key role in the development of Interbond 2340UPC, a universal pipe coating that provides external protection for piping, valves and vessels between -196°C and 230°C.

“It was a simplification of the product ranges that were out there,” he explains. “There are multiple products for each and every aspect, and it’s so complex that customers and applicators get confused and end up applying the wrong product at the wrong place and that results in having to rework the area.

“One product fits everything and the chance of getting it wrong is negligible to nought, while the performance of this product in all its conditions is really good. Its applicator-friendly and anti-corrosion properties were ones the customer would very much require.”

From recognising the technology’s properties, it took a team of five to six people – including two people from the lab and a small sales and marketing team – around three years to launch a commercial product into the market.

Seeing Interbond 2340UPC develop from the initial technology to having it used in countries from Russia to Australia, brought Ajith “joy” and “happiness”.

“There was a sense of satisfaction,” he says. “I would say this was one of the early products I was involved in and developed that went commercial.”

Ajith says AkzoNobel’s International brand is in “pretty good shape to make that leap to the future”.

“We have people who are highly knowledgeable in the organisation, highly motivational, and a very good process system now set up and embedded in the company.”

Sustainability is one way the International brand is gearing up for the future, Ajith says, with its focus on ecological innovations helping to shape product development.

“I don’t think any company can sustain itself without emphasis on sustainability,” he says. “Sustainability is not just nice to have, but it’s a must have, so it’s good that our company is number one in sustainability compared to our peers.”