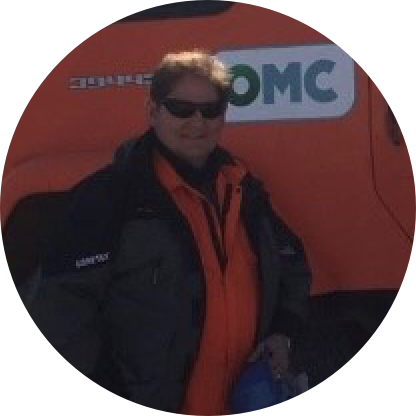 ‘The name’s Langley… Chris Langley’: Why the career of Interplan’s digital mastermind sounds like something from a spy movie

Facing down gun-toting troops, ditching a helicopter in the sea, and fleeing a coup all sound like the kind of life-threatening scrapes you’d associate with the world of espionage.

But, Chris Langley neither has a license to kill, nor a codename that begins with double 0.

Yet, these are genuine situations he has found himself in during more than a decade with AkzoNobel’s International® brand.

One of the key figures in the digital transformation of Interplan – the fully-integrated, flexible coating survey and maintenance service package for the downstream oil and gas industry, Chris has a long history of being out in the field, inspecting sites in some of the planet’s most far-flung locations.

He explains: “We’ve had to go offshore into some of the most remote places that you could imagine and some places have actually been so dangerous, we’ve actually required security support.

“On one trip we had to do an emergency landing by helicopter in the sea.

“And I was once in Equatorial Guinea when there was an attempted overthrow of the government. One of the expats that was travelling with me coming back from the offshore platform decided to take a picture of one of the military checkpoints and the next moment we had guns at our heads, lying flat on the floor.”

Chris, now AkzoNobel Asset Integrity Key Accounts Manager, joined the company around 12 years ago, when he was living in South Africa, where he worked in the oil and gas sector.

“AkzoNobel has given me a lot of opportunity to grow, they've put their trust in me to take on something that was not very familiar, which was securing asset integrity painting programs - using Interplan, and I'm really proud to wear the AkzoNobel flameproof boiler suits on site.”

“I’ve done quite a lot of work in terms of offshore asset integrity, which is basically about maintenance in the offshore industry,” he explains.

“I came on board to start having a look at tank linings and I had the opportunity to get in and do inspections on tank linings and work on floating production storage and offloading units (FPSOs), which are like floating refineries.”

This experience of site visits was the inspiration behind digitising and updating Interplan so it was fit for the 21st century.

After a few years a colleague Kris Barton joined the team, and worked together to build upon the success of the original paper-based system to create a digital platform, which he says “was a lot of work”.

“You needed two people to manage it,” he says. “One person who can focus on developing and supporting the development of the software with the technology company and then the second person, like myself, who would take it, test it and use it, as well as sell it.

Despite being a breakthrough application, which uses state-of-the-art technology and big data, the Interplan app started life as a series of sticky notes fixed to an office wall.

Chris says: “I went to Wichita in Kansas to meet with our technology partner. We sat in the meeting room and stuck up big sheets of paper and we went around the whole room with sticky notes, making a flow diagram of how we would start looking at a new corrosion inspection programme.

“That was the forerunner to developing the Interplan mobile app.”

It has since gone on to transform the way inspections and maintenance are carried out globally.

“We have this really effective system where we are now entertaining the idea of using drones and hopefully Remotely Operated Underwater Vehicles (ROV) pretty shortly.”

Chris says he’s proud to represent the International brand because he is able to take on new challenges in different areas within the business.

He says: “AkzoNobel has given me a lot of opportunity to grow, they’ve put their trust in me to take on something that was not very familiar, which was securing asset integrity painting programs – using Interplan, and I’m really proud to wear the AkzoNobel flameproof boiler suits on site.”

“When traveling to a project, I’ve always got either an AkzoNobel cap or a t-shirt and people often come up to me and ask me about International. When they ask me what I do I say I’m a painter because I’m selling paint, so I’m a painter at heart.”