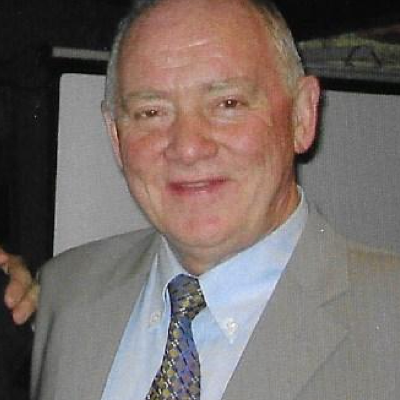 With a career with AkzoNobel’s International® brand spanning 42 years, John Kirby is part of an elite group. He is one of just four people at the company who have been awarded the coveted and prestigious golden propeller.

“It was for exceptional service and long service,” explains John, who was AkzoNobel’s General Manager of the Central Europe protective coatings business before he retired in 2004.’

“I ended my career looking after Protective Coatings in the UK and Ireland, Benelux, Germany, Switzerland, Austria, Poland, Czech Republic and Slovakia.”

John is best known as one of the brains behind Interplan, International’s breakthrough maintenance and repair service. He joined The Courtaulds Group in 1962 and transferred to what was then known as International Paint in 1972 where he initially worked as a Project Engineer which largely involved redeveloping International’s Felling site.

“After all those years, the site was in need of refurbishment,,” John says. “So we painted all the buildings, we re-roofed some warehouse buildings, knocked down gantries, knocked down the old chemical departments, and lots of work like that.”

After his promotion to Maintenance Manager, a job he did for five years, John moved to Sheffield and joined International’s painting division Structural Painters. It was there the idea for Interplan was born.

“I was in Sheffield for about three years and International bought the Matcote company in Houston, Texas, which was interested in entering the European market with its Oil Storage Tank Repair process. I was given the task of looking after the applications side of things and a man called John McCombes was the marketing champion for this process launch.

“John and I spent many hours together visiting oil refineries, so we spent a lot of time chatting about maintenance painting and how the International brand could actually launch the new high performance products they were developing.

“I said there was no way contractors, the traditional market, were going to be interested in these high-priced, high-value, high-performance products because they were just too expensive. The only way you were going to be able to introduce them into the marketplace was through end-user selling to maintenance engineers but you needed to be able to offer a valuable service and not just paint, so that was really the basis of Interplan.”

John eventually left contracting in 1983 and joined the protective coatings marketing department, where he spent around four years developing and launching Interplan with his colleague James Cape.

“I did all the initial work with James on brochures, inspection standards, report formats, testing methods, etc. Interplan was indeed a valuable service for maintenance engineers and a great way of introducing high performance coatings to the marketplace. We started doing surveys on site and I travelled around the world to different divisions, to Canada and America and all over Europe doing sample surveys and reports.”

Since 2014, Interplan has been a completely digital service, which uses tablets and employs state-of-the-art technology to carry out maintenance checks – a far cry from the pre-internet era where it first started life.

“Remember this was the 80s,” John says. “We didn’t have laptops, we were still on Telex when I joined the company and I remember the first fax machine being installed. John McCombes, my boss, had the first portable computer but it was huge, it was the size of a large suitcase.”

John eventually moved on from Interplan, recruiting a new employee to take over the running of it.

“John McCombes eventually moved on after a couple of years to a new job and I became the General Manager of the UK protective coatings business.”

John says he “loved working for the International brand”, and “enjoyed every minute of my time there”.

“The thing that I remember most is the people and how happy everybody was to work together,” he says.

“Every year we had a protective coatings weekend conference. I used to always put a bit of profit to one side, to the horror of the accountants, and we’ve been to Paris a few times, Amsterdam, Copenhagen, Brussels, Dublin, Edinburgh and London. Team building was so important for success.

“We had a great time and we enjoyed each other's company. Everybody was happy to work there and particularly in protective coatings.”
Return to Innovation