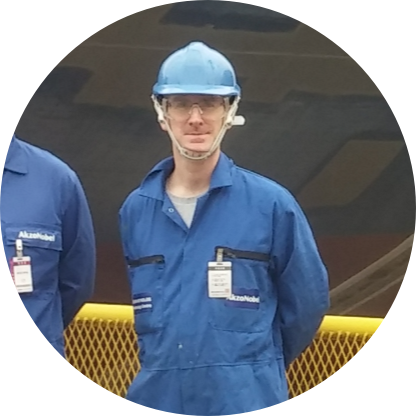 How Kevin Reynolds drove Intersleek 1100SR from design to production in record time.

Developing an anti-fouling hull coating that sets new standards for both sustainability and performance is no easy task.

But when you achieve that in a timeframe of just a third of a typical product development cycle – the success of Intersleek 1100SR is all the more impressive.

It’s a testament to the skill, dedication and professionalism of colleagues across the International® marine coatings, according to Kevin Reynolds – one of the driving forces behind the project.

The Section Manager – Technology and Innovation Delivery, who is based in Felling, UK, recalls: “We had a very short deadline – just three-and-half-years. It was one of the fastest turnarounds from concept to commercial launch that we’ve ever undertaken.

“The scrutiny on the project – and the importance of meeting the deadline – meant there was no freewheeling in any way shape or form.”

Chemist Kevin, who joined AkzoNobel’s International brand straight from university in 2008, was responsible for coming up with the initial concept. A multi-functional and multi-site team of chemists, hydrodynamicists and biologists in both Felling and Singapore contributed to its final ground-breaking formulation.

The only fluoropolymer foul release coating on the market that is entirely biocide-free, Intersleek 1100SR offers stand-out environmental benefits that support operators to meet their carbon neutral journey, while also providing nine per cent savings in fuel costs and CO2 emissions.

Incorporating patented Slime Release technology, it has been a significant success since its launch in 2013 contributing to 6,4000 ships globally being coated with Intersleek technology.

But, the development process was not always plain-sailing, as Kevin recalls.

“We went to see one of our suppliers who we were working with to develop the system in Italy, we didn’t know where we were going, so we just gave them the name of the company, not realising there were two sites just outside Milan.

“Obviously we ended up at the wrong one five minutes before we were due to meet their Head Chemist and Business Development Manager and on the completely opposite side of Milan for this really important meeting that we’d set up weeks in advance.

“We got the postcode of the correct place and we gave that to a taxi driver and he put it into his sat nav and he just stopped in the middle of a roundabout and said ‘here we are’.

“He basically kicked us out of the taxi. We didn’t know where we were, smartphones were just coming out, but by the skin of our teeth we managed to find out where we were supposed to be going and that was the genesis of the Intersleek project.”

Kevin says one of the most rewarding parts of the job is seeing a product go from an initial concept to being brought to market.

“It's pretty cool to be honest to go from painting the initial microscope slide - which is around 7cm by 2cm - and then three-and-a-half years later you're in a dry dock in Turkey and you see a passenger ferry that's been spray applied with your coating.”

But, for every success there are also products that don’t work out as well.

“One of my responsibilities is evaluating new groundbreaking technologies, which can often be unsuccessful,” he concedes. “This is all part of the learning process that allows us to learn what needs to be improved before bringing a product to market”.

“It’s nice to have the Intersleek 1100SR as something that was successful and for every failure you can reflect back and think that with hard work, solid science and the right people there’s something else out there waiting to be found” “This is my motivation for driving things forward in R&D.”

Being part of projects that push the envelope, like Intersleek 1100SR, is one of the main reasons why Kevin remains firmly committed to the International brand.

“I feel proud of my part in a global business that has such a track record for developing products that lead the industry,” he adds.