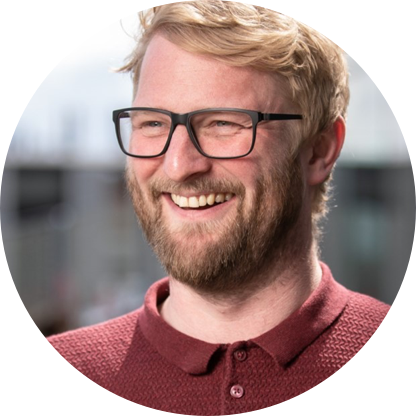 From polymers to data points - How Richie Ramsden developed Intertrac

When Richie Ramsden joined AkzoNobel’s International® brand in 2006, its focus was primarily on coatings.

Today, it is so much more than that – thanks in a large part to his pioneering work in big data.

Richie is one of the driving forces behind the Intertrac system, which has placed the International brand at the absolute forefront of using data to improve performance of the global marine fleet.

It offers customers unparalleled levels of expert insight into how their vessels are operating – providing them with unique reports that help them improve future coating choice, minimise fuel consumption and drive down their CO2 emissions.

In just five years, Richie had gone from being a research chemist – developing new polymers for antifoulings – to playing a key part in a team that developed a technology that has gone on to transform the marine industry.

He explains his eureka moment: “The idea started germinating in 2009. As a business we were continuing to develop industry-leading coatings. We would paint them on ships, wave them off into the sunset and we would take a look at them five years later and try to work out whether they had performed as well as we hoped.

“The following year the IMO introduced legislation requiring all vessels to emit a radio wave pulse that would allow them to be located anywhere in the world.

“We thought; ‘I wonder if we could harness this data’. Could we use it to work out where vessels coated with our products had been and understand the environments they have been through – whether that was warm water, saline water?

“We soon found out the answer was yes and it immediately showed us that our products generally performed better than we thought they did. Intersleek in particular worked better than we had thought.”

The result brought about the biggest shift in how to communicate with customers for a decade. Whereas cost had previously been their overwhelming deciding factor, now product performance could be proven.

“The Intertrac system is now the benchmark through which all other systems are measured. It’s now ten years old and we remain the most trusted name in the industry.”

By 2011, just five years after joining the company, Richie was focussing on data full time.

The following year saw the Intertrac platform win crucial internal recognition. Richie explans: “In 2012 we won an internal creativity award for Intertrac. It was really crucial in showing the business what we could do with data and giving us the platform to expand.”

Since then, in 2014 Richie’s team secured funding from the UK government for the development of machine learning models to predict fouling adherence.

Two years later his efforts were rewarded by winning the UK IT Big Project Of The Year. “That made us really pause and take stock for a moment. It showed that we weren’t just leading developments in data use for the marine industry – we were leading this in a global sense as well.”

“He provided me with the time and space to look into it. He told me to explore that area more.

“His encouragement was incredibly important. As his patience has been as well.

Richie is confident that the International brand will continue to drive the industry forward. “We’ve got a reputation for being at the forefront of innovation – and that will only continue.

“We’re known as disruptors and developments in technology will only mean that disruption will become more pronounced in the future.

“New competitors are emerging all the time, but we will continue to prosper by ensuring we create new value for all our clients.”